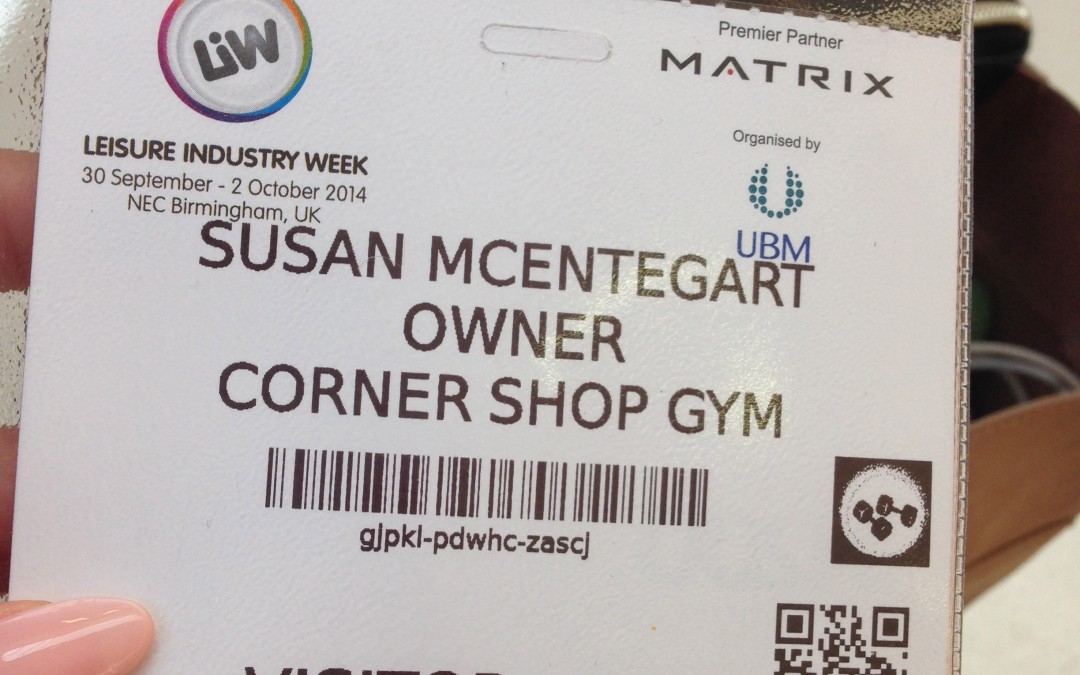 So after very little sleep (3 hours!) and a red eye into Birmingham I finally arrived at Hall 1 in the NEC for the first day of Leisure Industry Week a.k.a. LIW. It’s odd as I’ve been coming to LIW for quite a few years now originally as a buyer, then as an exhibitor for my a software company and now as the owner of a business! As a consultant I need to make sure I’m on the cutting edge of industry trends and know detail about wide variety of solutions which may help my clients and prospects. I found it really worthwhile last year and hence I booked a trip again this year.

I’ll be completely honest and say I was disappointed to see it had been moved to a smaller hall meaning there was likely to be less exhibitors and as there was no apparent lanyard sponsor this year we just had to suffice with pinning our name tags to our tops…not the best first impression.  When I got inside my fears were confirmed and I thought to myself I should have just done 2 days and 1 night! However,there was some interesting changes and some proactive measures taken by LIW ahead of this years. The biggest being solving the issue of having speakers compete with the pumping music and shouts of instruction on the live demo stage. So this year our talks were all like a silent disco! Each theatre has great big earphones on hand so we can all hear the speaker clearly. A definite improvement but it kind of hampers interaction. 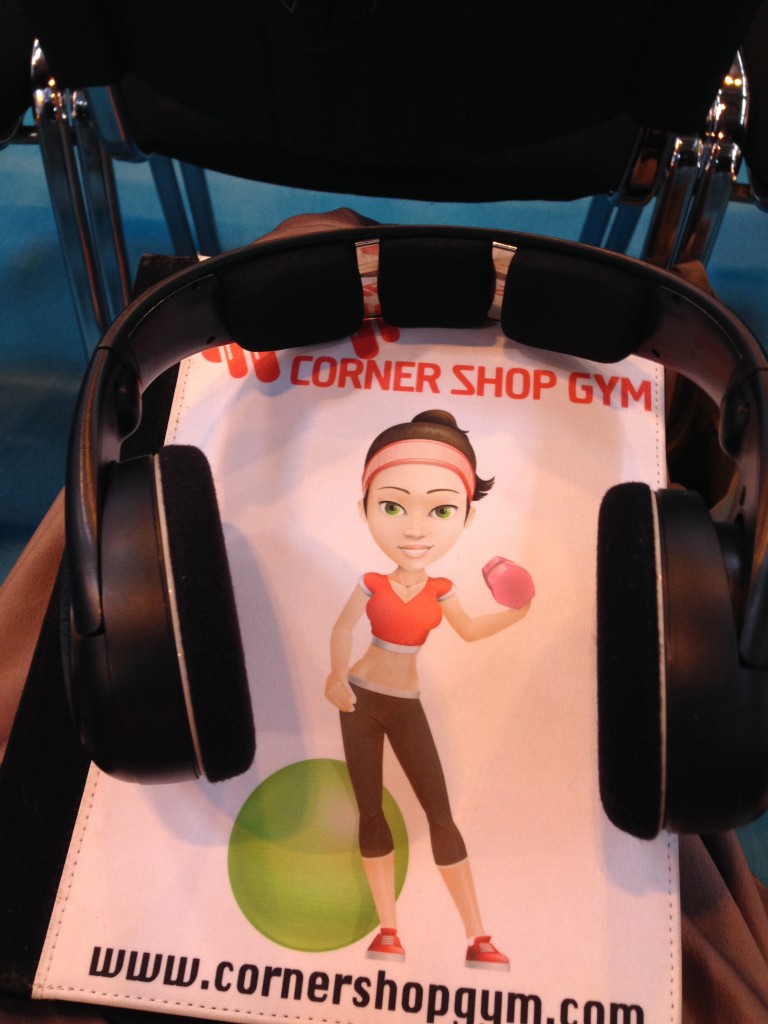 I attended a few sessions in the education series donning these fabulously larger than life earphones!  My favourite as ever being Paul Bedford, a.k.a.The Retention Guru. It seems his findings following the 2012 Retention Report are still applicable with people who are offered shorter contracts leaving sooner – STOP selling short term contracts and stop promoting the fact someone can leave as a selling point!! Older members are still the most loyal with our youths displaying a portable loyalty and moving frequently. I also went to see The Retention People talk about their “secrets” to keeping your members coming back. again interaction was by far the winner and somewhat surprisingly the achievement of goals and weightloss were ranked lower amongst participants than expected. Once more I think this trend is why our small local gyms are succeeding as it’s the personal touch and the interaction with the owner, coach etc that is key to keeping members happy. In a large gym you may get from the door to your workout back to the changing rooms and home without one single interaction and this is a BIG problem! 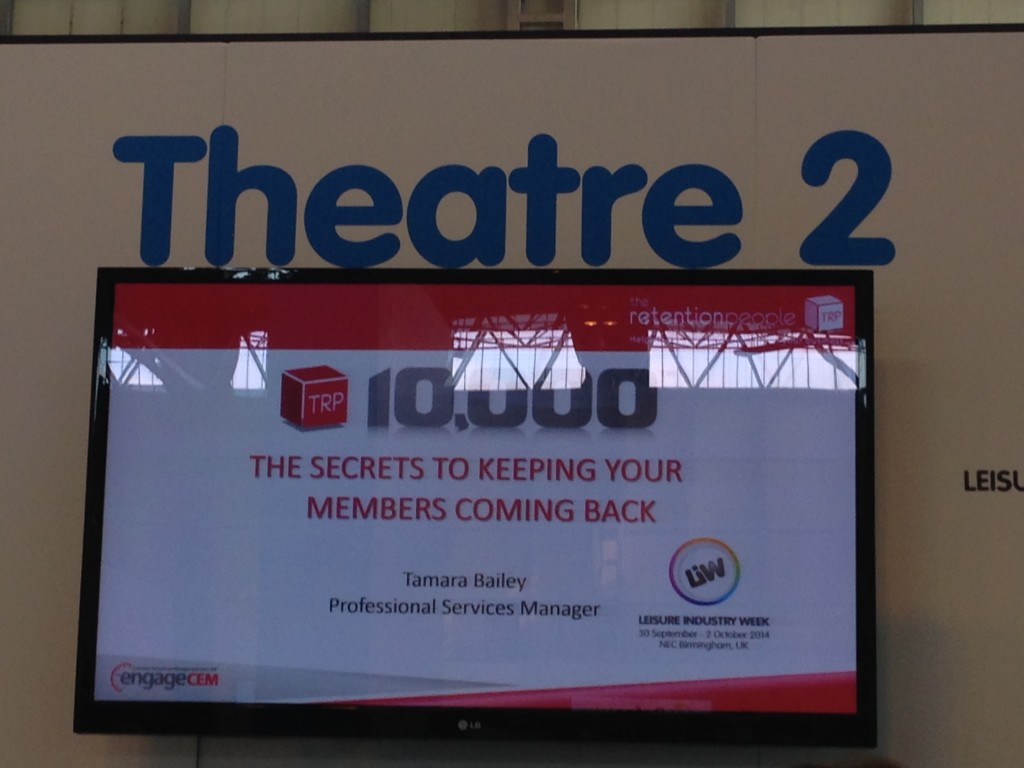 The second big change was their app created by  Double Dutch. I thought last years app was good but this years is super cool! It allows me to see first names of delegates, includes a timetable for the education series allowing me to create a personal shedule and to check into talks. I can interact with other delegates via the newsfeed and I can also upload photos of the event. It is super but uptake is very low and dissappointly so via the software companies. Only one of all the software exhibitors are interacting with members via this app – to me that is absolutely shocking!

While I mention the software suppliers I should mention that as I wandered around the hall I noticed an interesting trend – the number of software suppliers exhibiting seems to have increased year on year while the sellers of gym kit had quite obviously reduced. Many of the exhibitors are selling licensed programmes and classes and retail products including protein & shake containers, kinesology tape and vending solutions to name a few. It really seem that it is the rise of the “Corner Shop Gym” is hitting the UK just like Ireland as we see a shift in the exhibitors to match this trend.

So thats my thoughts after day 1… stay tuned for more info after another couple of days here in Birmingham. For live updates pop over to my Facebook and Twitter accounts.