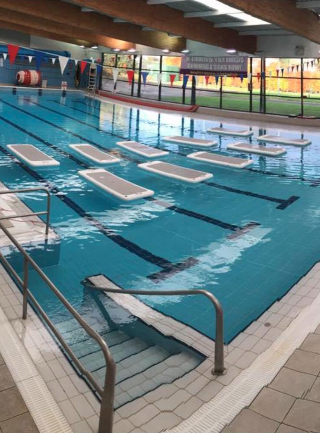 So, while I was chatting to some of the staff from DLR Leisure at a recent industry event I found out that they were planning a new Aqua Float Fitness class. Super excited to finally see this trend come to Ireland I bashed the ears off the lads about my SUP (stand-up paddle-board) yoga experience in Malta last August. A few weeks later an invitation to a taster class being held in their Meadowbrook centre dropped into my inbox for Friday 2nd December, much to my glee.

So when the day finally came I excitedly headed into the centre and the welcoming receptionist handed me medical screening and consent forms to complete which was pretty standard so didn’t take too long to complete. I then headed into their changing village and found a free cubicle to get changed in before giddily skipping out to find a locker (50c coin operated) and get ready for class. Being at 7pm on a Friday evening a few weeks before Christmas the facility was quiet and the aqua boards looked so peaceful floating in the crystal clear water. Before I got to jump into the pool Greg, the instructor, pulled me aside to run through a few things from my screening which reassured me massively (as some of you know, I audit and mystery shop clubs regularly for clients and it’s seldom my screening form is ever actually reviewed!).

The water was a lovely temperature, much warmer than I expected but then, being honest, I was hoping I wouldn’t be in it too much!! The class does require “water confidence” but unless you are terrified of water I wouldn’t panic too much. I could stand on the pool floor beside the boards meaning unless you are much more of a munchkin that the mere 5″3 of me you should be ok!  The aqua boards are large rectangular floats with a matted area about the size of a yoga mat taking up most of the board with handles on each end. I looked at it bobbing on the surface at about shoulder height and must have looked as bemused as I felt as Greg instructed me “just pull yourself up on it” – and I was about as graceful as that sounds 😂

Sitting on the board for a few minutes before class began Greg made sure we were all comfortable and ok. The boards are connected to a rope so you can’t drift off well physically that is because I know that if I’d closed my eyes I could have been transported to a holiday pool lazing on a lilo under the sun. That was until Merry Christmas Everyone blasted out on the speakers and Greg got our attention to begin! We started with a gentle warm up and by eight minutes past seven we were doing our first plank. By quarter past although I was having a lot of fun, I wondered if it was a 60 minute or 45 minute class because the instability caused by the water meant my core was firing on every single move. Simple land based exercises like supermans and mountain climbers became incredibly challenging. The warmer we got the more Greg pushed us with a blend of intense upper body and core exercises demonstrating them from the pool deck. There were a lot of giggles and a lot of slipping off the board but this didn’t disrupt the flow at all. Greg walked up and down so even when my abs were screaming and my shoulders giving up on me he was RIGHT THERE to motivate me to try just one more rep, oh and then just one more… and yes why not another “just one more” after that too (I felt a pang of guilt for doing the very same to my clients while teaching!). As some of my regular followers know my old back injury had been playing up the previous week and while much better there was one or two exercises that I just could not compete and this was also fine, Greg motivated you to work to your own limits.

By half seven, yes just 30 minutes in, Greg had us all standing on the boards successfully. Then came the squats… Once we had our balance he guided us through a series of squats with some pulses thrown in for good measure. The gentle ripple of the water below causing every muscle in my body to fire as I desperately tried to stay upright. This was mentally and physically challenging and delivered a serious adrenalin kick too!

As class came towards an end (thank god it was only 45 mins!) we were given some challenging moves, most of which none of us could do, but even trying felt like a workout. There was a LOT of laughter at this stage and for those of us who were still on the boards and not in the water Greg instructed us to jump off so we could do our cool down and stretch in the water.

By now, knowing it was an epic workout I began to wonder (ahem, worry!!) just how bad the DOMs (delayed onset muscle soreness) would be. I won’t lie, I woke up on Saturday morning a little delicate and that continued on for a good 2 days, proving how effective this really is as a workout. It was an awesome class – a perfect blend of a killer workout with a bundle of fun and laughter in a totally safe and welcoming environment. Its definitely 5 stars from me!

If you are living in Dublin and interested in trying this out it’s launching officially in January in DLR Leisure Meadowbrook with two different 5 week course options – either pick Wednesdays at 8pm starting on the 4th January, or Fridays at 7pm starting on the 6th January.  At a very reasonable €65 for the 5 weeks and only 12 spaces per course I can imagine this will fill fast! Feel free to pop me any questions below but for detailed info or to book give the DLR gang a shout on 01 2995510 or pop into them at the centre.