In a week that has seen customer service (or lack thereof) hit the news several times I felt it was worthy of further discussion! Firstly we saw the surreal and obnoxious open letter from a Dublin Hotelier addressed to prospective guests regarding their prices on the nights of the recently sold out Ed Sheeran concerts. Next over to Manchester and to the controversial 47 King Street West Restaurant where a manager responded to a customers complaint online in what they later conceded was a “regrettable” incident. Finally, supermarket chain Fresh issues all staff with a memo asking them to refrain from using a language other than English to avoid making their colleagues and customers from feeling uncomfortable.

So – where do we begin?! Well for me the least worthy of discussion and most sensational of the lot is definitely the outburst from hotelier Paul Stenson of the Charleville Lodge. In his open letter Paul justifies his price hike to match the expected demand (which personally I have no issue at all with!) but he then went on to insult the intelligence of prospective customers, to suggest alternative accommodation by way of homeless shelters and dog rescue kennels for those who did not wish to pay the Charleville Lodge’s rates. Personally I think it was intended to go viral with a belief perhaps that no publicity is bad publicity. Their facebook page gained thousands of new likes in the proceeding days and many media outlets including national newspapers and radio stations covered the story. Perhaps it was a success if measure by that alone but personally as an advocate of excellence in standards and first class customer service I believe there is a reason we have the word infamy!  Personally I would not give custom to such a business as even if it was intended as humour in my mind it was misguided and I do not believe such obnoxious opinions can be accompanied by someone who runs a customer centric business. 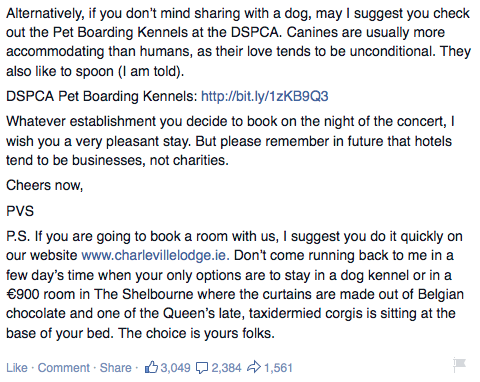 On to the restaurant in Manchester where a hen, Melissa Grogan-Morgan, and other members of her party all received a tirade of abuse for reviewing their experience on the restaurants facebook page. Comments from the manager included “The Chavviest, worst most vile people ever to grace our restaurant.” “We pity the groom!” and referring to them as “peasants” because they questioned the bill. In one of my recent social media training courses we discussed handling negative reviews on your page and I can assure you that this restaurant do not do it the right way! By listening, showing respect and responding to a customers complaint you can often move them up the ladder of loyalty from customer to advocate if they are happy with the outcome. I always train my students to welcome customer feedback even if it is a complaint. While we may not agree with their perceived service experience you must acknowledge that perception is in fact reality in the eyes of the consumer

The Fresh Supermarket Memo published on Broadsheet.ie on Monday last brought once again the topic of customer service to the forefront. The real issue was however that in the original memo they asked staff to uphold this policy both while working and while on their breaks but since have reduced the scope of this to just while working which seems more reasonable. They have also offered to assist and even provide language classes for staff who struggle with the English language. This really does appear to be a policy motivated by a customer centric business looking to further enhance the customer experience and while perhaps the initial memo was a little far reaching their subsequent amendments and refusal to back down on this is commendable in my opinion.

So, all of this begs the question – is the customer always right?! The Journal.ie have a live poll on this going at the moment and the results so far are quite interesting. 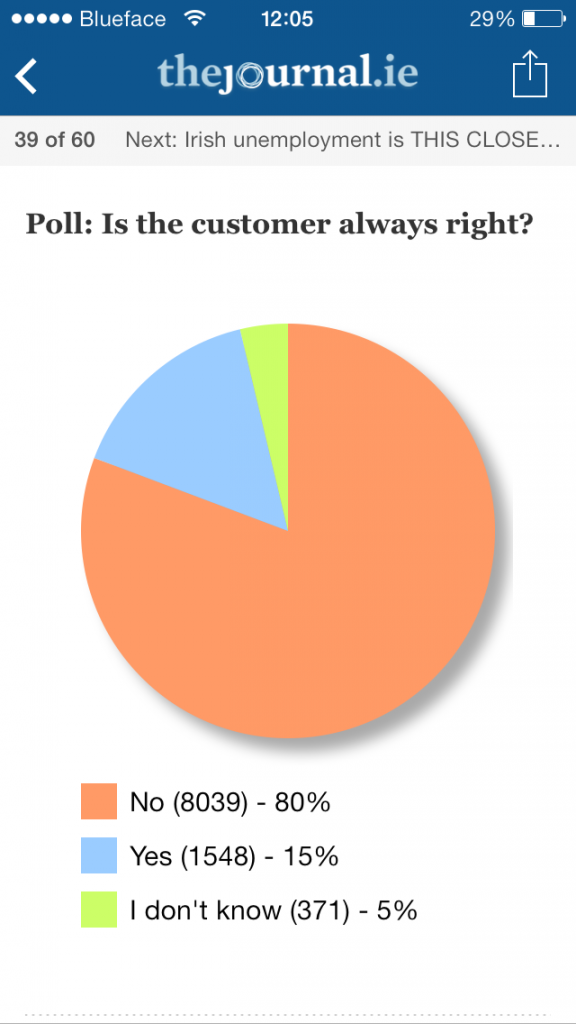 What did I vote you ask? Well, I said no. I say this because after years working in the service industry on the front line with customers I have seen and heard it all! I have handled many awkward and difficult situations where sometimes the business was at fault and other times we were not. Regardless the common denominator was that the customer was unhappy and hence the complaint. The customer may not always be right but they deserve to be heard and to have their concerns addressed.

Furthermore the terms right and wrong makes customer service seem very black and white when in fact it is a delightfully grey area. In order for one party to be right or to be victorious the other must loose or be defeated. Surely none of us want this scenario either for our business or for the customer? So perhaps lets move away from the black and white and instead work with customers to provide a better solution to problems. My parting thought when it comes to customer service? It’s undoubtedly “ If you try to win the battle you may loose the war”

If you want more information on or need help with handling complaints and negative feedback via your social media business accounts sign up for our FREE webinar at 12pm on 13th March here.