As I write this blog I am fighting the fiendish curse of a fancy holiday abroad – Jet Lag. I arrived back in Dublin on Monday morning at 7am having left my hotel in Las Vegas at 6am the previous morning, needless to say I wasn’t at my chirpiest! As someone who generally struggles with sleep – sleeping on a plane is nigh on impossible for me. Despite avoiding too much alcohol, staying hydrated and relaxed and bringing every possible mask, blanket, cushion available to aid sleep it just seems to evade me. If I’m lucky I get a fitful 20 minutes here and there. By the time I got home at 9.30am I decided a 2 hour “power nap” would support me in the plan to stay awake all day until bed time finally arrived and thus to adequately re-set my circadian rhythms.

Rookie Error #1 – Get Himself to Wake you up…

So with strict instructions to let me sleep for no longer than 2 hours, and to ignore any and all protests I would make on waking, I sunk into my lovely bed and drifted quickly off to snoozeville. I was woken up 5 hours later at 2.40pm – Epic Fail!

Now absolutely jaded after my  “power nap” became extended, leaving more powerless than powerful, I dragged myself to the couch and put on a movie. In reality I should have put on my tracksuit and headed out for a walk and fresh air. Instead I spent the afternoon drifting in and out of sleep none of it very good quality and none of it for very long.

By 9.30pm I figured what the hell – I’m off to bed. I had a beautifully deep sleep until 2am when I awoke with a start. The same again at 2.30am but this time around I was WIDE AWAKE. A 3am cup of sleepy tea did not help, neither did running out of lives on Candy Crush or reading pages of my book. So by 5.30am, with a growling tummy, I decided to get up and cook breakfast and take my cherry capsules.

I stayed up until midnight on Tuesday, so I was wide awake for 21.5hrs in total, but high functioning I was not! The real curse of Jet lag is once you are caught in the cycle it is very hard to get out and rather you just have to ride it through. So as I am doing this I thought it would be a good idea to blog about it with the tips and tricks I have learned and failed to implement!!

So, what is Jet Lag?

Well basically it is an altering in the body’s natural circadian rhythms usually caused by rapid long distance travel – i.e. a long flight. Our circadian rhythms allow our body to recognise and respond appropriately to changes in the day-night cycle. Our rhythms get thrown out by things such as pulling an all nighter (which I do too often), working shifts and most commonly flying long haul. When working effectively our rhythms ensure we remain high functioning and alert during the day and then at night become restful and relaxed. Light has a big part to play in this (just think how much harder it is to get up on a dark winter morning than on a bright summer one) but an important role is also played by our hormones, namely melatonin.

Melatonin is released in higher quantities during the night when we sleep and lower levels during the day. It is effectively a synchroniser of the wake-sleep cycle and its release is linked to dim light. Babies melatonin release starts to regulate after 3 months which is why often new borns do not settle very well. With teenagers the release is often delayed resulting in a later sleep-wake cycle ie going to sleep later at night and waking up later in the day.  As you can see therefore it is an incredibly powerful and important hormone.

There are studies over recent years that have shown increasing your melatonin levels will aid your sleep cycle and recovery from jet lag, shift work etc. One great way to do this is via montmorency cherry juice. Montmorency cherries are tart or sour cherries  which are an abundant source of melatonin and also a source of tryptophan. (without getting too sciencey tryptophan is used to produce seratonin in the body which elevates out mood and enhances restfulness. Seratonin is used to help produce melatonin so you can see how the cycle perpetuates). So in short, it is believed these cherries can really aid your sleep cycle and one recent study carried out by researchers in Louisiana State University (source:  How Cherry Juice Helps Sleep) found that drinking 2 glasses of montmorency cherry juice a day for 2 weeks resulted in an increased sleep time of 90 minutes older adults. 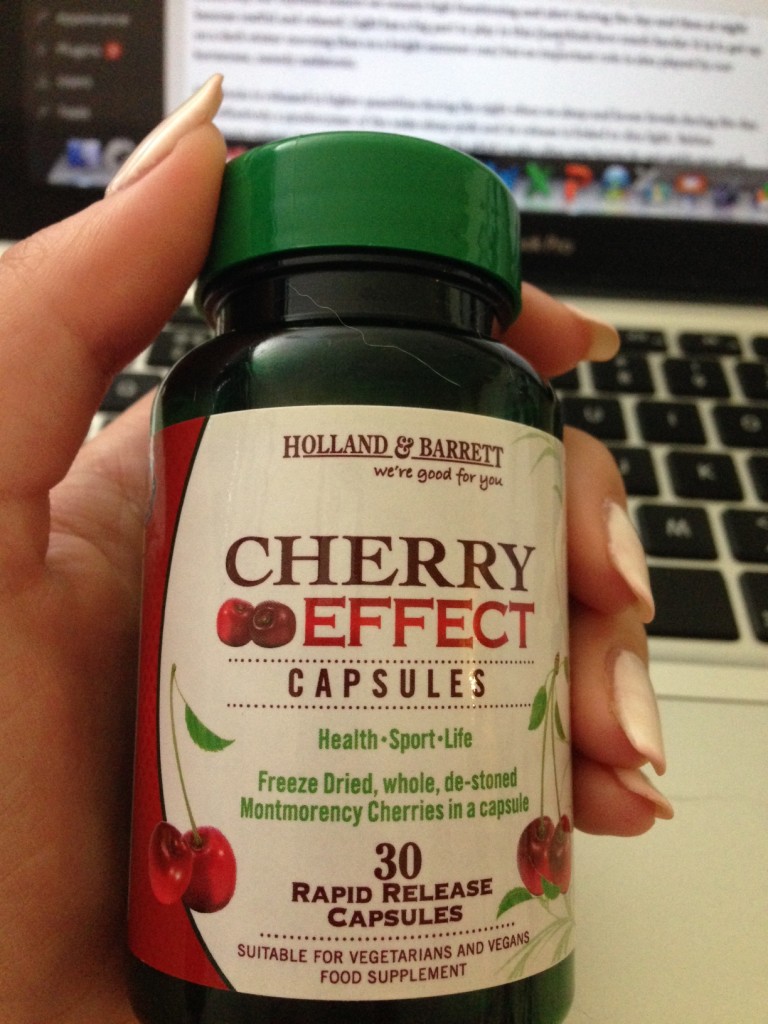 As a sufferer of insomnia I try to keep a bottle of montmorency cherry concentrate in the fridge at all times or if its out of stock I will pick up some freeze dried capsules. These can be bought in most health food sores and there are a number of brands as well as the stores own brand. I have used “Cherry Active” which I get from Nourish Health Stores  for years as well as Holland & Barrett’s own brand capsules. I did buy some capsules to take away with me but rather stupidly left them at home so am now topping up my melatonin with them in the hope that they will aid the passing of this jet lag.